The Worley Population of the USA - a Simulation

In 1990 the number of Worley males in the USA was around 14300, and in 2001 the corresponding figure for the UK was around 1360. Given the difference in the total populations, these figures may seem unremarkable, but from one perspective they do appear odd. We begin with the assumption that US Worleys are descended from settlers from England. Then assume that at some date in the past 10% (say) of the English Worleys settled in the USA, and that thereafter the populations of the two groups increased in proportion to their numbers and at the same rate on both sides of the Atlantic. The populations today would still be in the ratio 90:10 in the UK's favour. The actual position is about 10:1 in favour of the USA, a staggering 90-fold discrepancy. Evidently one or more of our simple assumptions is in error.

Having had some success in simulating the growth of Worley numbers in the UK, a similar exercise has been attempted for the USA. Initially, an analogous calculation was performed with immigration replacing the surname adoption that occurred in Britain. It was soon noted, however, that it was unreasonable to assume that settler families from the UK were all of different haplotypes, because the English results suggest that one haplotype may predominate. So a combined program was written in which the year repeatedly increments by one and families on both sides of the Atlantic evolve - so any settlers are automatically representative of the mix of haplotypes available in Britain at the time. The program is much slower than the purely English version, because there are population constraints to be satisfied simultaneously in both countries. The graph below presents the mean results obtained from ten trials, showing the US Worley population overtaking the English one in about 1800. It also appears that there should be a dominant haplotype in the USA which is the same as the dominant English one - and there could be a large family, descended from a single ancestor and with members living today on both sides of the Atlantic. The simulation suggests such a group could have about 1100 members in England and about 13,000 in the USA. The simulation also suggests that the populations we see today arise as a result of around 1650 Worley male settlers moving from England to the USA between 1620 and today. This all bodes well for a transatlantic DNA match - time, and more DNA tests, will tell.

Finally, and reverting to real data rather than simulation, an interesting comparison may be made between the male populations of the UK (in 1881) and the USA (in 1990) for a collection of English locative surnames (Alsop, Cavendish, Ingham etc). The result for Worley (the data point is to the left of the name) is well above the trend line for the others. One possibility is that a greater proportion of English Worleys emigrated than did from many of the other families, enhancing the US Worley population and depleting the numbers at home. 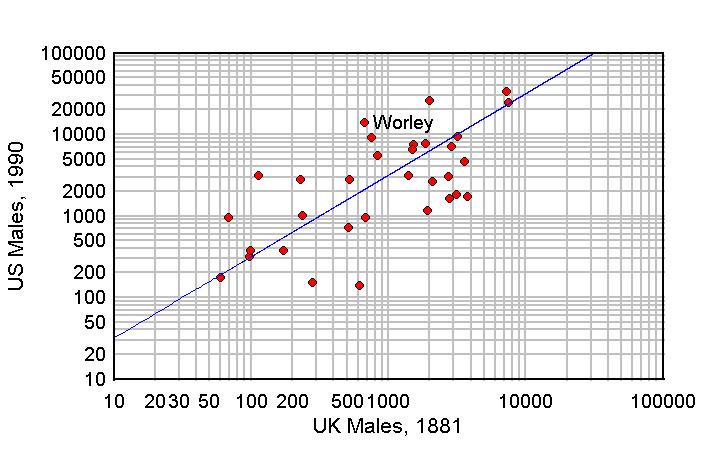