The Name Worley in England and Wales

Surnames are generally of four types - they may be derived from nicknames, such as Short or Ball (the bald), occupations such as Smith, Cooper, other Christian names such as Richardson, Jones (son of John) and placenames such as Alsop, Botham, Cavendish, Dainton, Ecclestone, Fyfield, Glossop, Hattersley, Ingham, Kettley, Loxley, Merton, Newby, Oakley, Pilkington, Quested, Rushton, Scargill, Tatham, Upton, Worrall or Yarwood. Since there are far more placenames than occupations, surnames derived from placenames (all of the above examples, and the name Worley itself, are described by UCL's Surname Profiler as English locational surnames) are more numerous, but each is held by fewer individuals - overall, about 17% of the population bear such names(1). The name Worley belongs to this category, and derives from the villages of Great and Little Wyrley in Staffordshire.

Most placenames are combinations of Old English (Anglo-Saxon) placename elements which describe, mainly, the local topography and date from between 400-1100 AD. The placename Wyrley has as its roots(2) the OE elements wir (the bog-myrtle or Myrica gale) and leah (a glade or clearing), meaning a clearing where this plant grew. The name was recorded as Wereleia in the Domesday survey, as Wirlega in 1170 and 1176, and as Great Wyrley by 1300.

It has been suggested(3) that most surnames derived from a placename began with a single family, though it is by no means necessary that this should be so. It is possible that two unrelated men (known simply as John and Richard, for example) may have left Great Wyrley, settled in two nearby villages and become known, quite independently, as John de Wyrley and Richard de Wyrley. In due course the 'de' would be dropped and the two families would bear the name Wyrley, later Worley. If this did occur, and both of these families flourished, then the present day holders of the name may not have a common ancestor.

My first estimates of the Worley population of England and Wales were made many years ago, using the laborious method of counting the numbers of Worley birth or death registrations in a particular time interval, using the public facility then at St. Catherine's House in London. The data begin in 1837. If we make the assumption that the birth and death rates for Worleys are similar to those of the population at large, then dividing the figures obtained by the appropriate birth or death rate for the same year gives an estimate of the Worley population for that year. In 1970 there were, apparently, about 2700 of us in England and Wales, or about 1 in 18,100 of the whole population. In 1846 there were about 840 Worleys, 1 in 20,200 of the population.

More recently, two developments have made such work much easier. First, the 1901 Census of England and Wales has been placed online on behalf of the Public Record Office and provides a quick and more accurate estimate of the Worley population. A global search for the name Worley will fail because the numbers are too large, but the search program allows searching in bands of age. Adding the results gives 1946 Worleys, compared with a total population of 32,678,213 - this is 1 in 16,793. 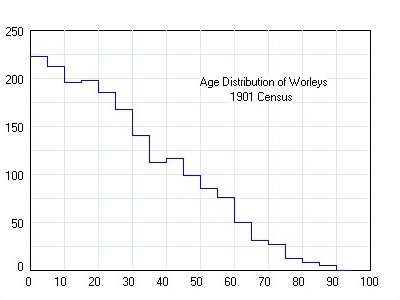 The second development has been the release by Archer Software of a Surname Atlas which allows the mapping of any of the 40,000 surnames featured in the 1881 census. This allowed the instant generation of the number of Worleys in the 1881 census for England and Wales - 1321. With a total population of 25,974,439, this represents 1 in 19,663.

An estimate of the current Worley population is provided by the ONS Names List which has been generated from a more extensive database maintained by the Office for National Statistics. The searchable database contains 270,000 surnames held by 54.4m people, and suggests that there are about 2730 Worleys living today in England, Wales and the Isle of Man. The Worley surname is ranked number 2635. It also estimates that there are, or have been, a total of about 10,300 Worleys since the start of parish registers in the 16th century. With a total population (using the 2001 Census of England and Wales) of 52,041,916, the Worley number of 2730 represents 1 in 19,063 of the population. Summarising, with the least accurate estimates shown in brackets:

The ratio in the last column shows little change over more than 150 years. If we assume that Worleys made up a similar fraction (say, 1 in 18,000) of the population in earlier years, then in 1350, when the total population was about three million(4), the Worley number would have been about 170. In fact, this must be an overestimate, because many surnames have become extinct since that time, and it follows that the numbers of persons holding surviving surnames must grow at a greater rate than the population as a whole. If 70% of surnames have become extinct(5), the 'Worley' population in 1350 would have been about 50. This number includes men and women, children and the elderly - the number of heads of households adopting the surname on their behalf would have been even fewer - perhaps no more than ten. So the number of persons bearing the name Worley in 1350 was indeed probably small. A mathematical simulation of the growth of the name Worley in England provides support for this conjecture and is then refined to tackle the same problem for the USA.

The earliest possible ancestor I have located is Galfridus de Wirle in Staffordshire in 1175. Records at these times are extremely selective; mainly it is the rich and influential who are recorded in their marriage settlements, business and litigation. A further complication is that surnames were not, at that time, necessarily passed on from father to son. Thus in 1203 we have Edwin Litelhand (a nickname) given as the father of Osbert de Wyrley.

In the fifteen and sixteenth centuries, however, surnames were used much as they are today, and, given sufficient data, it is possible to construct reliable family trees spanning many generations. One Staffordshire family are of particular interest - their pedigrees are recorded in the Visitations of Staffordshire in 1614 and 1663-4, and it has been possible to verify and extend some of the later information using the parish registers of Handsworth. The family are mentioned in Digital Handsworth (enter Wyrley as the search term). They are of significance to me because in 1550 one of their number, John Wyrley, moved to Dodford, Northamptonshire, in which county my own family has been based since at least 1746 (the journey should have been straightforward - both Great Wyrley and Dodford are very close to Watling Street). The Visitations of Northants provide a family tree for a small number of Northamptonshire Wyrleys descended from this John, but provide few clues as to how the family then developed. One of the aims of future work will be to try to establish links between Worley families thoroughout Northants and the early Dodford family. In particular, of course, I would like to see if there is a connection between the Dodford family and my own earliest well-established family member, John Worley of Moulton, who married in 1746, since Dodford and Moulton are only ten miles apart. Such a link would, at a stroke, add many more generations to my family tree, but it remains elusive.

In 1951 Great Wyrley celebrated 900 years of history, and two local authors(6) wrote of its origin and of the Staffordshire Wyrley family. They state that the family 'came to an end' in the latter half of the 18th century when a marriage failed to produce a male heir. I trust that this statement should not be taken too literally, since many of the descendants of earlier male members of the family surely remain undocumented, and it is to these lines of descent that I look to explain at least some of the Worley families of today. Despite the effects of migration there are, even today, distinct differences in the distributions of surnames across the country(7). Using the data for deaths in the years 1837-1864, we find that there were 516 Worley deaths across the country, 53 of them in Northants. So although Northants in 1851 represented just over 1% of the population of England and Wales(8), it had about 10% of the registered deaths amongst Worleys, suggesting that the family were strongly concentrated in Northants. Two other counties, Huntingdonshire and Buckinghamshire, had even higher concentrations of the name, and ten counties (Cumberland, Dorset, Gloucestershire, Hereford, Northumberland, Rutland, Somerset, West Riding, Wiltshire and Worcestershire) scored zero on this measure. Surprisingly, Staffordshire in 1851 is not high on the list - it comes 12th, though the area of Handsworth taken on its own does score much higher. So why do these three nearby counties have higher concentrations of the Worley name than Staffordshire itself, where the name originated? The problem is by no means uncommon for locative surnames(9).

Again, the Surname Atlas takes the drudgery out of such work, and for the 1881 census produces: 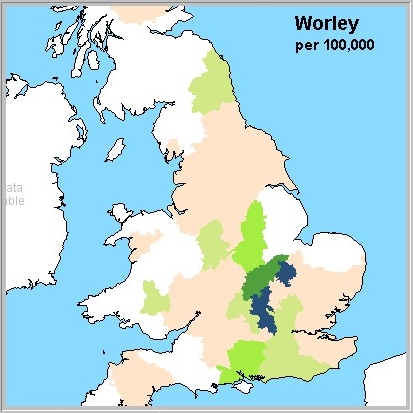 The map shows the Worley concentration county by county, colour-coded to show the number per 100,000 of population. Once again, the three counties with the highest concentrations were Buckinghamshire, Huntingdonshire and Northamptonshire, and again Northamptonshire emerges in third place. The equivalent map for 1998 may be found here.

Despite many years of studying original parish registers and bishop's transcripts for parishes surrounding Moulton, I have not managed to trace the baptism of my 4x-great-grandfather John Worley, married in Moulton to Sarah Smith in 1746. He was a cheesemonger; I suspect that his parents were Thomas and Elizabeth Worley, because Thomas was also a cheesemonger, and John called his first two children Thomas and Elizabeth. With this assumption, I can assemble a tree with eight generations, of which the first five are shown below:

There were Worleys in Moulton at least as far back as 1621(10), but John's baptism does not appear in the records, and no other children of Thomas and Elizabeth are mentioned. John died in 1768 and Sarah remarried in 1773. She died in 1810 aged 85 and the oldest resident of the parish at the time. This gives her birthdate as around 1725, which means she was twenty one when she married. If John were, say, 25, his birth would have been around 1721, and taking the average interval between the baptism of a father and any of his children as twenty nine years (from a limited study of Northants Worley families), then Thomas could have been born in around 1692. Unfortunately, the baptism registers between the years 1635 and 1689 for Moulton are lost - if Thomas were born in Moulton a little earlier than our estimate, we may never know it unless an alternative source of evidence can be found. Most family tree researchers eventually reach a dead end, beyond which no further progress seems possible. My own sticking point in the early eighteenth century is certainly no rarity. But a modern technique offers the possibility of attacking the problem from a fresh angle. Y-chromosome DNA testing detects features in male DNA which are passed almost faultlessly from father to son. If any one of my nth-great-grandfathers before John had a brother who has male, Worley, descendants living today, then any one of them should share my DNA signature. Having established a match, it would then require a return to conventional research to try and trace a common ancestor. A Worley Surname DNA Project set up to find such links for the benefit of all Worley family tree researchers identified seven distinct Worley families. Here is a summary of the results:

Some of my results are given below. If you are male with the surname Worley and, as far as you know, your father and his father, etc, were all called Worley, and if your test results match mine, then please get in touch so that we can compare the rest. The online Haplogroup Predictor assigns me to haplogroup I1.

For Worley surname distributions in the USA try the state-by-state White Pages statistics.

For some useful Worley data and links, see:
Karen Worley's research into the descendants of John Worley, d.1757 in Cumberland County, Virginia.
Genes Reunited currently has more than 2100 Worley entries.
The Worley Family Genealogy Forum is a messageboard for Worley researchers.
...and you can contact me at aw@xiboo.co.uk